The Cropston Enclosure Act was passed by Parliament in 1781, despite one landowner (probably Richard Burchnall) withholding his consent.

Examples of old names of other features of the landscape are Vincent Flatt, Slate Bridge Common and, intriguingly, Windmill Lane.

Davis’s role was no doubt to represent the interests of the church because the Rector of Thurcaston at the time was actually resident in Bloxham.  Sultzer and Walker would have been appointed to represent the major landowners. There seems to have been a difficult relationship between them because Sultzer made a will the following year in which he referred to “that rascal Henry Walker, a bankrupt.”

The commissioners’ costs (£930 16s 4d) were shared between the landowners other than the Rector.

The decisions made by the commissioners were recorded in an Enclosure Award. It is an impressive document, hand-written on 15 large sheets of parchment, which can be inspected at the Record Office in Wigston. Sadly the map that would have accompanied it is missing but the Award contains enough detail for the map to be reconstructed with a fair degree of confidence.

The decisions made by those three men over 200 years ago had a big influence on the subsequent pattern of development and largely shaped Cropston as we see it today. 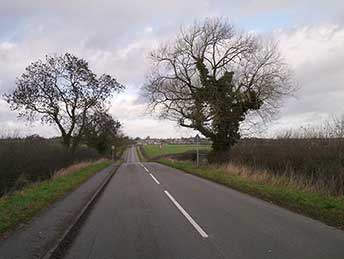 Cropston Road, between Anstey and Cropston. A straight road, at least 40ft between ditches, as laid out in the Cropston Enclosure.  © Peter J Smith 2015