The city of Leicester was faced with a growing population at a time when, after epidemics in 1831,1832 and 1847, cholera was a major concern. Thornton Reservoir had been built in 1854, but another source of clean water was needed.

In the words of the chief Engineer, Mr Hawskley, the advantages of Bradgate over the other sites under consideration (Bardon, Groby and Bagworth) were:

" the finest stream, the best water, the cleanest drainage and, under all consideration except that of pumping, the most advantageous scheme is the Bradgate "

Most of the land required for the reservoir, dam and waterworks belonged to the Bradgate Estate. Lord Stamford insisted that a stone wall be built around the boundary to separate the deer park from the reservoir, instead of the proposed iron railings. This wall, 1,500 yards long was eventually built at a cost of 8s 10d per yard. 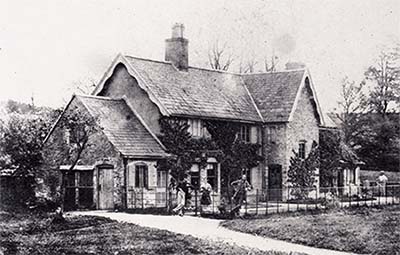 Some of the Bradgate Estate land was part of the deer park, but most was farmland let out on very long leases.  One farmer, Joseph Allen, lost virtually all his farm. Two members of the Matts family had theirs considerably reduced in size.

The Gamekeeper’s house and land, together with a nearby bridge, were also in the area to be flooded.   The house, together with its stables and outhouses, were demolished and the bricks sold.

Part of the footpath between Anstey and Hallgates was submerged, as was the site of the old rabbit warren (or conery).