Enclosure was the process of re-allocating the ownership of land.   In England and Wales most enclosure was carried out during the 18th and early 19th centuries by Act of Parliament (Parliamentary Enclosure).   There was a separate Act for each village, and it could be requested if the majority of the landowners of the village concerned were in favour.

However, some land had been already been enclosed in the preceding centuries, some with and some without local agreement: these enclosures were not always legal and could be the subject of protracted litigation (as happened in Thurcaston). 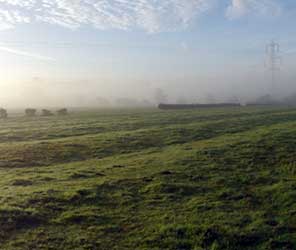 Each village’s arable land was divided into (usually) three large open fields which were in turn divided into strips. Villagers owned individual strips, with ownership usually distributed across all the fields.   Decisions about crop rotation were made comunally.

The system of narrow strips meant that the pattern of ploughing was the same each year.   As soil was heaped into the centre, permanent ridges and furrows developed which can still be seen in places today.

Larger landowners wanted to consolidate their holdings into individual, enclosed fields.   This meant that they could convert the arable land into more profitable pasture, or introduce new more efficient ways of growing crops for sale to the increasing urban populations.

Commissioners and surveyors were appointed to undertake the process of re-allocating the total land available in a village in proportion to the area owned pre-enclosure.   They had to assess the claims made by each landowner.

Before the land was divided between claimants, some was allocated for two purposes:

The commissioners recorded their decisions in an Enclosure Award document which was accompanied by a map. Sadly, the maps (including those for Cropston and Thurcaston) have often been lost.

After Enclosure - The “Traditional” English Landscape

Landowners enclosed their new fields, often with hawthorn hedges to create the patchwork appearance which we consider traditional.