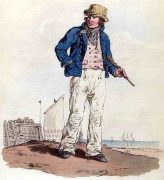 John and Elizabeth Clarke were the parents of Richard Clarke. Their son was born in Thurcaston in 1779. His baptism was entered in the parish records on May 3rd of that year. He may have attended the Richard Hill School before leaving the village to join the Royal Navy.

His name appears as an ordinary seaman in the crew list of HMS Britannia in 1807 when the ship was part of the fleet commanded by Horatio Nelson. This was one of the ships that fought that year in the Battle of Trafalgar.

Richard survived the experience but never resided in the village again.

Thurcaston is proud to acknowledge that one of its sons played a part in one of this country’s historic events.